August 21, 2016
As soon as it was announced that the 2016 USAT National Championships would be in Omaha, NE - I booked a hotel.  It was sometime in July, and you could not even qualify for the event yet, but I knew that would be my goal!  The very first race that I could qualify at, I did!  I qualified at three different races :-)

The original plan was to focus on the olympic distance this year.  I was to work on my speed, especially on the run, and earn that Team USA Tri Kit.  That was my big goal after all.  I took the steps necessary.  I booked my race schedule with plenty of olympic races with a few sprint races to really push the speed.  I started going to speed sessions with Hanson's Running Group and started seeing a trainer to increase my strength.  Then I got the amazing news that I was picked to go to Kona and represent Women for Tri...  my training changed drastically.

I knew my  mindset needed to change, too.  I still planned to go to USATAGNC, but this year was to be about recon.  Usually the championships are in the same location for at least two years.  I would go this year, even though I knew my run was nowhere near TEAM USA status, and check out the course.  I would treat it as a hard, supported, training day.  I have bigger dreams to chase this year, after all.

So... my dream for the TEAM USA Tri Kit is just delayed, while I work towards my Kona dream.  I will call this race Dreams Delayed  :-)

I drove most of the day on Thursday and the morning on Friday to get to Omaha.  I got to the race site with plenty of time to do a practice swim and safety test on the bike before check-in was required.  I checked in to my hotel and took a nap :-)  I was so thrilled to meet to fellow Women for Tri members for dinner and then headed to bed pretty early.  I did put on my number tattoos, set out then pack up my transition gear, and set my goals.


My wave was not to start until 9:30, so I resisted my normal habit to be at transition the second it opened at 5:30am.  Let's just say I will not go against that habit again.  I made it to transition with plenty of time, but only because I parked on a side street and walked a half mile in.  If nationals is in omaha next year, I hope they get that figured out.  They ended up delaying the start by 15 minutes because of the traffic, meaning I would not start until 9:45.

After transition was set, I moved my car to a spot right next to transition and tried to relax for 1.5 hours...  It was a long wait!

Swim: 1500m/32:56.4 This swim was not wetsuit legal because the water was 86 degrees.  It did feel very warm and was impossible to see in.  It was green, and you literally could not see your own stroke.  This made me nervous, to get kicked in the face.  I was slower than usual, but felt fine getting out of the water.  It is a long run to transition!

Bike: 40k/1:15:48.3 What a fun bike course!  It was challenging for sure, but there were a couple of really great declines that made for some fast speeds.  I had a bit of an issue with my nutrition on the bike.  I am working on switching to all liquid nutrition.  Since it was very hot and humid, I took in a lot of fluid.  My body could not absorb the quantity of liquid I was taking in fast enough.  With 5 miles left on the bike, I threw up... all over myself.  I did not feel crampy or sick, I just felt too full.  When I burped... well, it was not just a burp.  Worse part is that I had to spend the next hour plus with myself smelling like puke.  I ended up puking several times before the bike was done :-(

Run: 10k/1:00:41.1 Running is not my thing.  Considering I had just been sick, I actually did pretty well for where I am in my training (long slow miles), but I was bummed that I had to walk as much as I did.  I could not keep my heart rate down and I could not take the heat very well.  I played games with my mind to try to keep running.  I used cones as incentives and pretended that every one around me was in my age group and that I needed to beat them to my tri kit (I knew I was no where near it at that point.)  It was cool to run into the Ameritrade Center and see ourselves on the big screen.  The run was flat and if it had not been so hot, should have been fast...  not that day, not for me.  If I want to get that tri kit, I will have to get faster on the run.  I reached out to a run coach that afternoon - I will start with him after Kona. 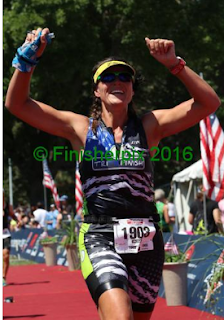 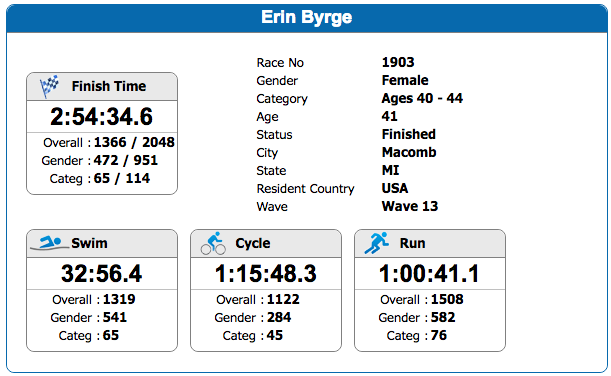