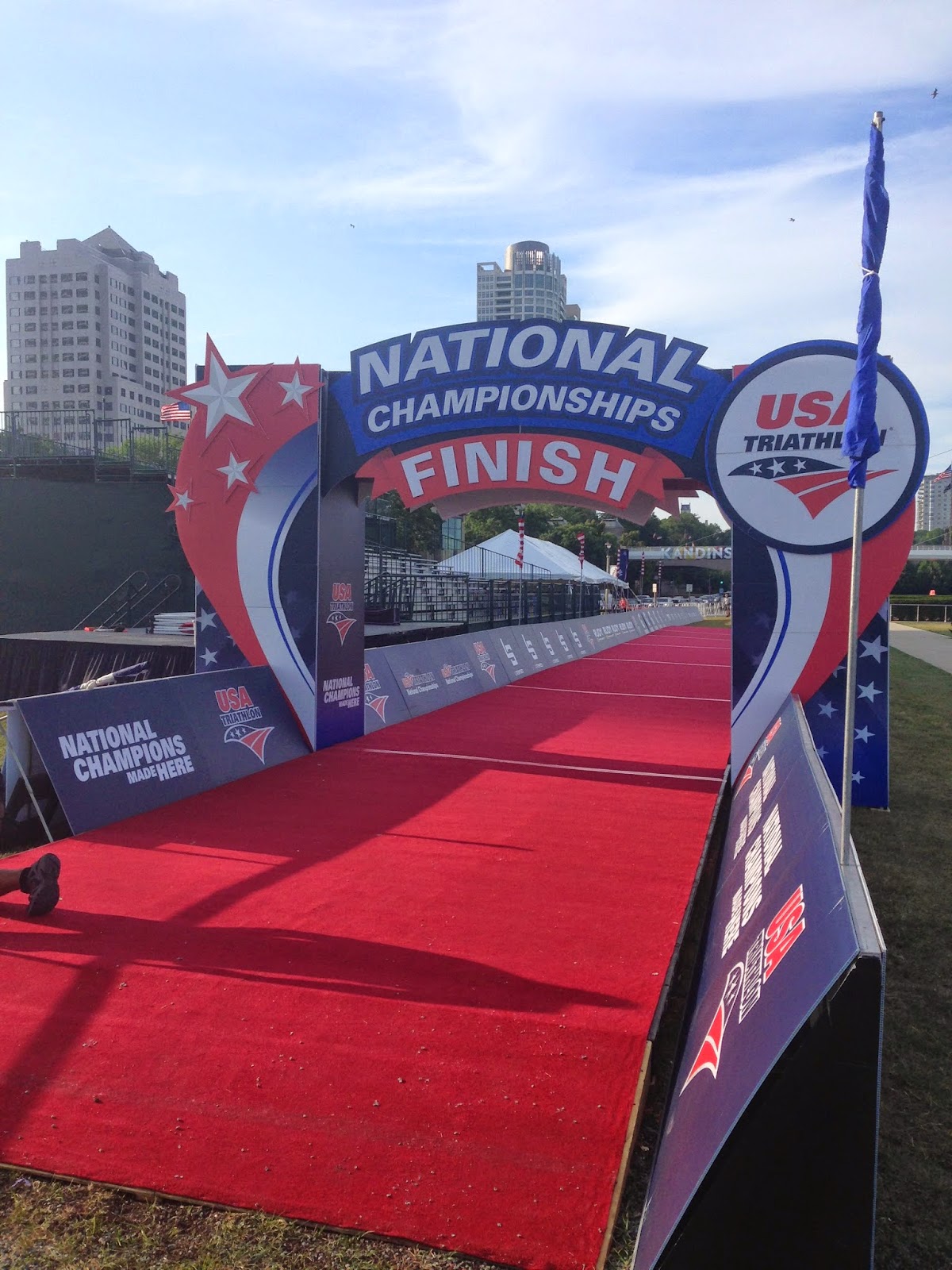 At Tri Goddess Tri in July, I qualified to compete in the Age Group Nationals Olympic Distance. I hadn't thought much about going to nationals until that race.  I looked online and learned that top 25 in each age group would make Team USA and go to World's representing Team USA, which is in Chicago next year.  I looked at times from last year and determined that there was no way I would make the team racing the olympic distance.  When I looked at the sprint distance times from last year, I thought I would have a much better shot if I stuck to the sprint distance.  So I signed up, changed my training focus, and allowed myself to believe that I had a shot at the Team and the awesome Tri Suit with my name on it.

I drove all afternoon on Thursday, and got to Milwaukee in time to pick up my packet on Thursday evening.  Pretty awesome swag!!  Got a jacket, a cinch sack, and a SweatVac hat.  After packet pick-up I headed to my friend and sorority sister's house where I would be staying for the weekend.  A huge shout out to Lesley for opening her home to me.  I would not have been able to go otherwise!  We went to one of her favorite restaurants for dinner that night.  Milwaukee is a pretty cool town.

On Friday, Lesley drove the bike course for me so I could check out the hills and I had dinner through USAT - a pasta dinner.  It was great to meet other participants from around the country.  On Saturday, we walked around the race venue and watched the Elite athletes compete in the Super-Sprint.  Man they are fast!  So cool to see. 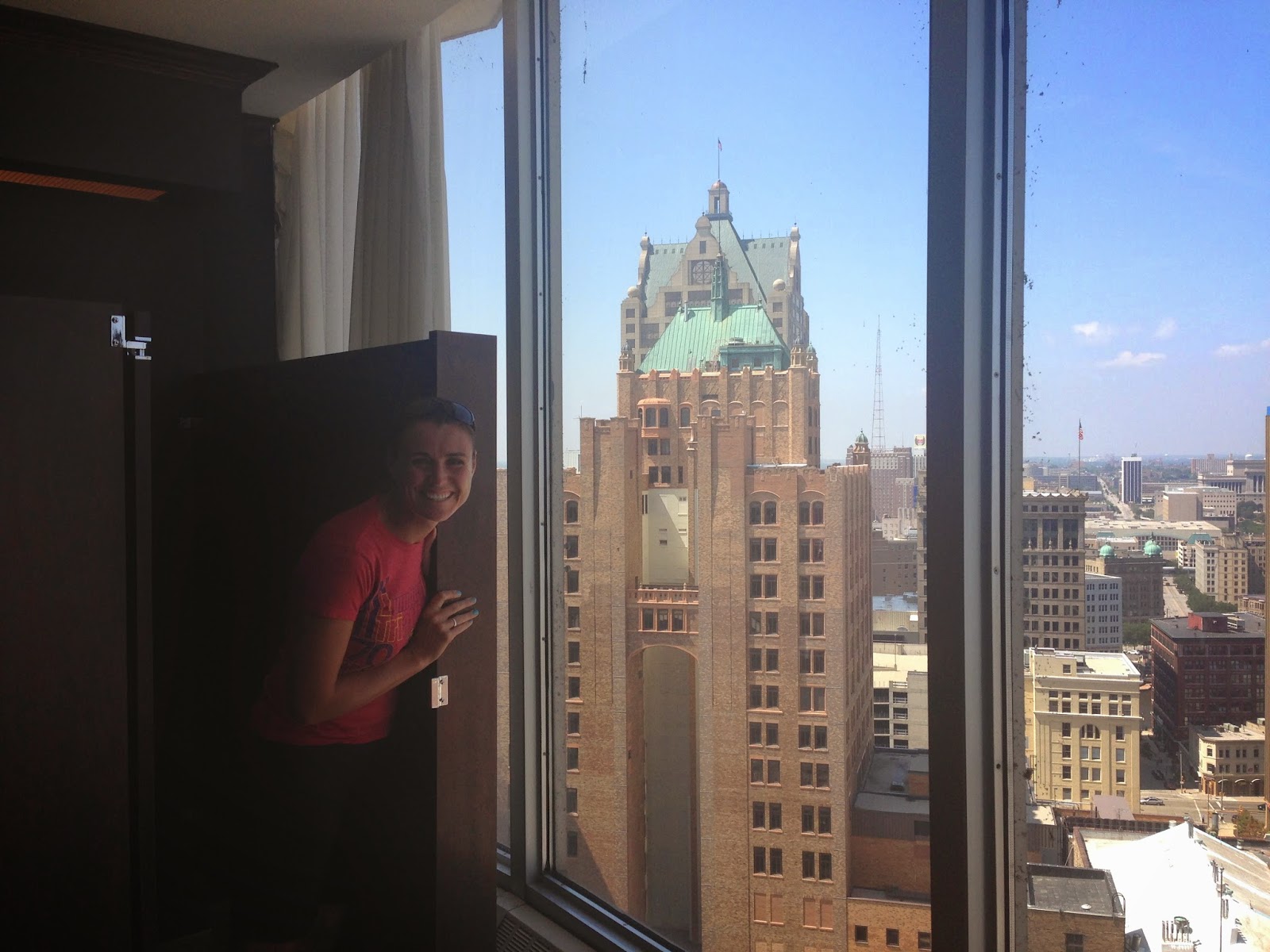 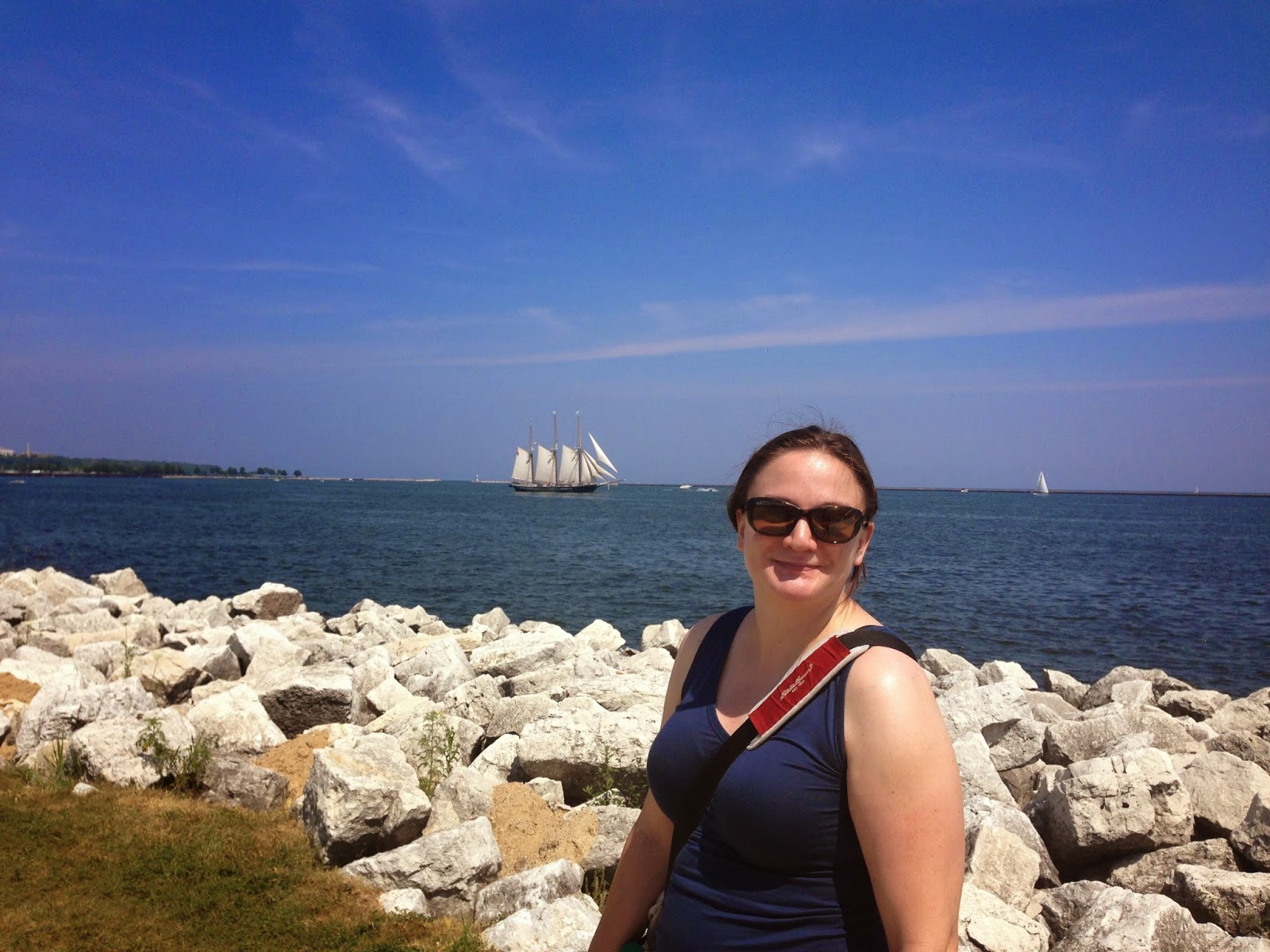 Once the men's race was over, it was time for me to check-in my bike.  So weird to leave it overnight!! 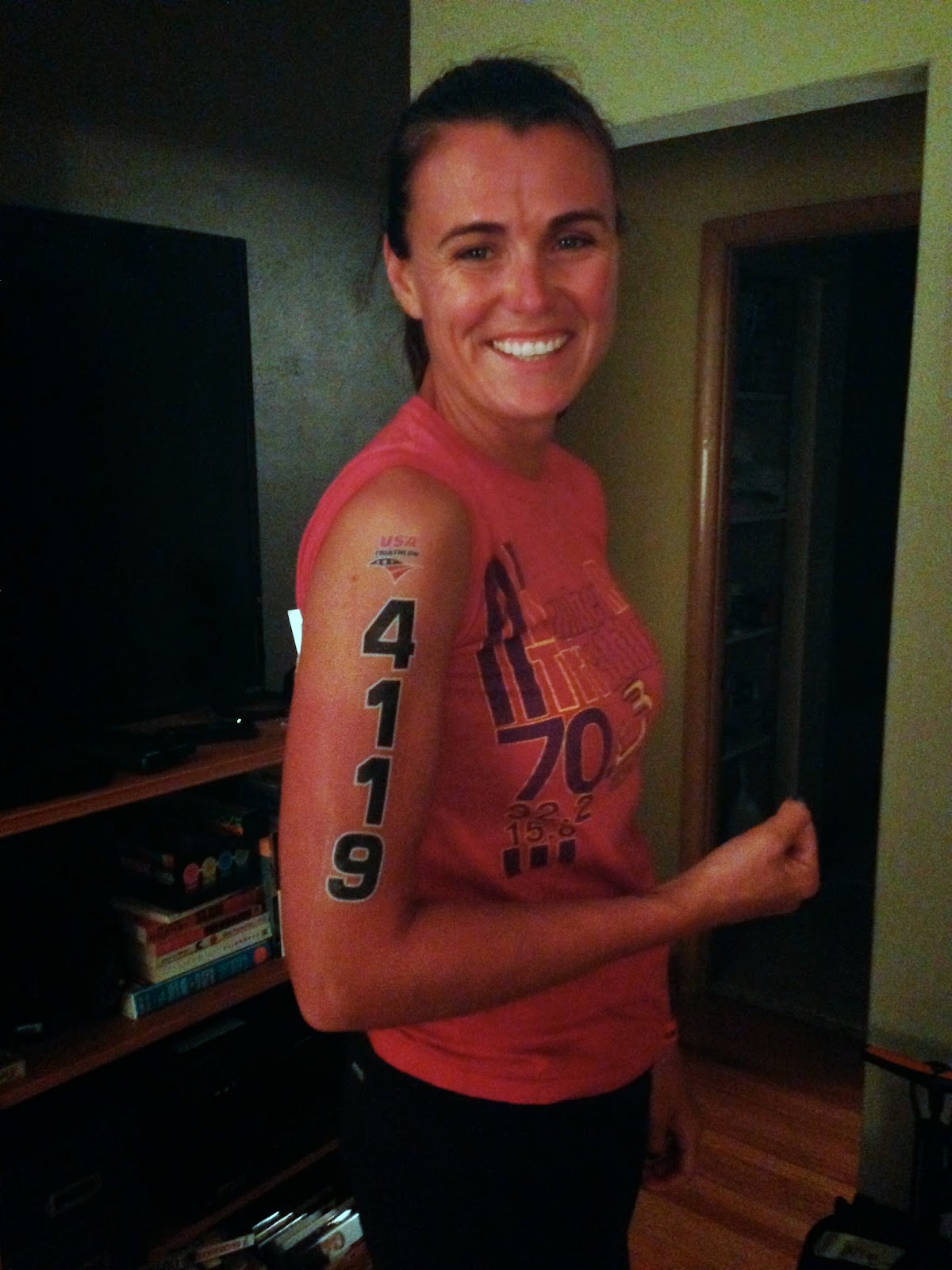 Before bed on Saturday, we went for another great dinner and I put my race number tattoos on.  Starting to feel official!

My favorite part of race day is always the sunrise.  This big race certainly delivered with a big sunrise for me!  Here are some pre-race pics: 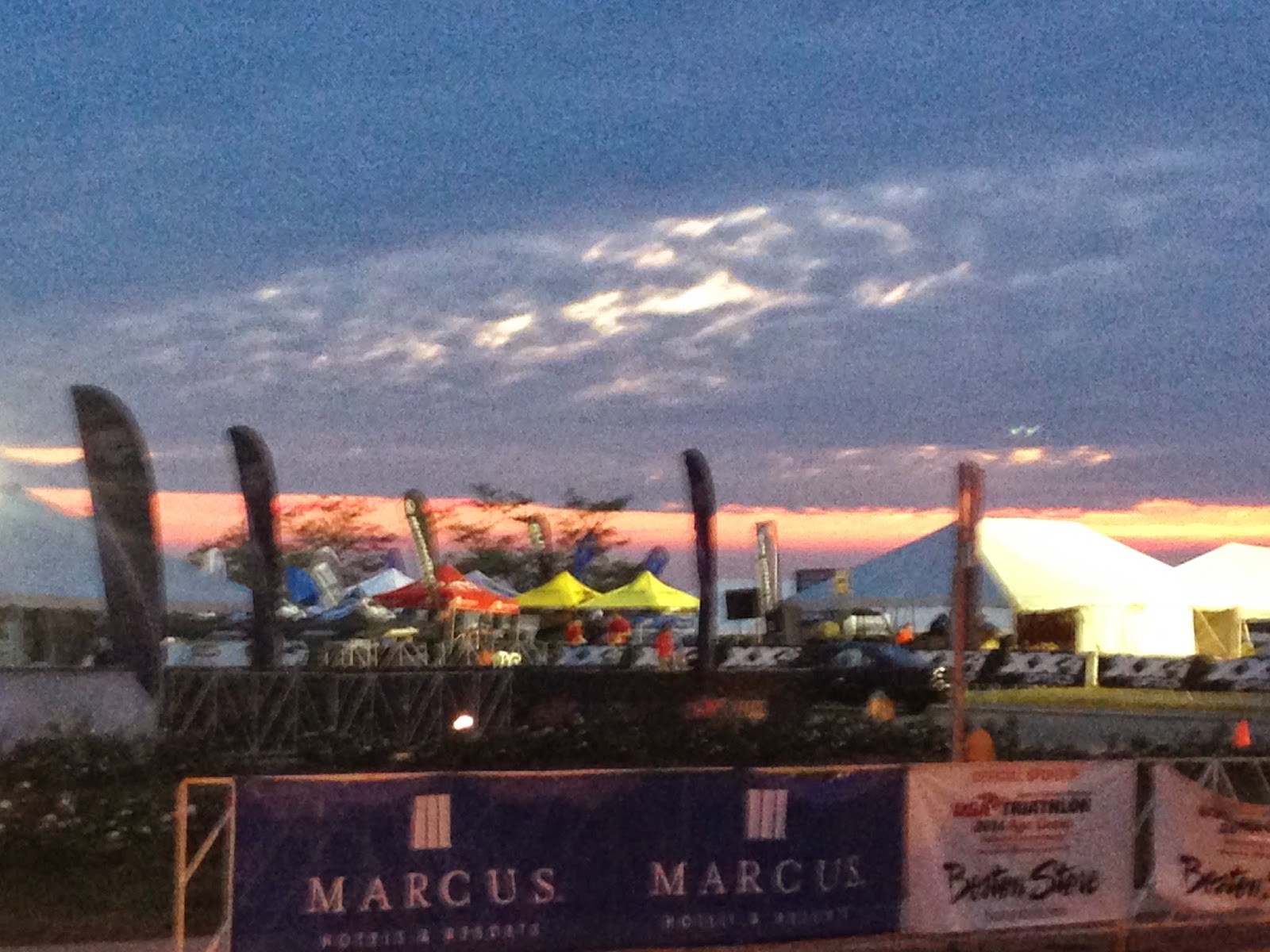 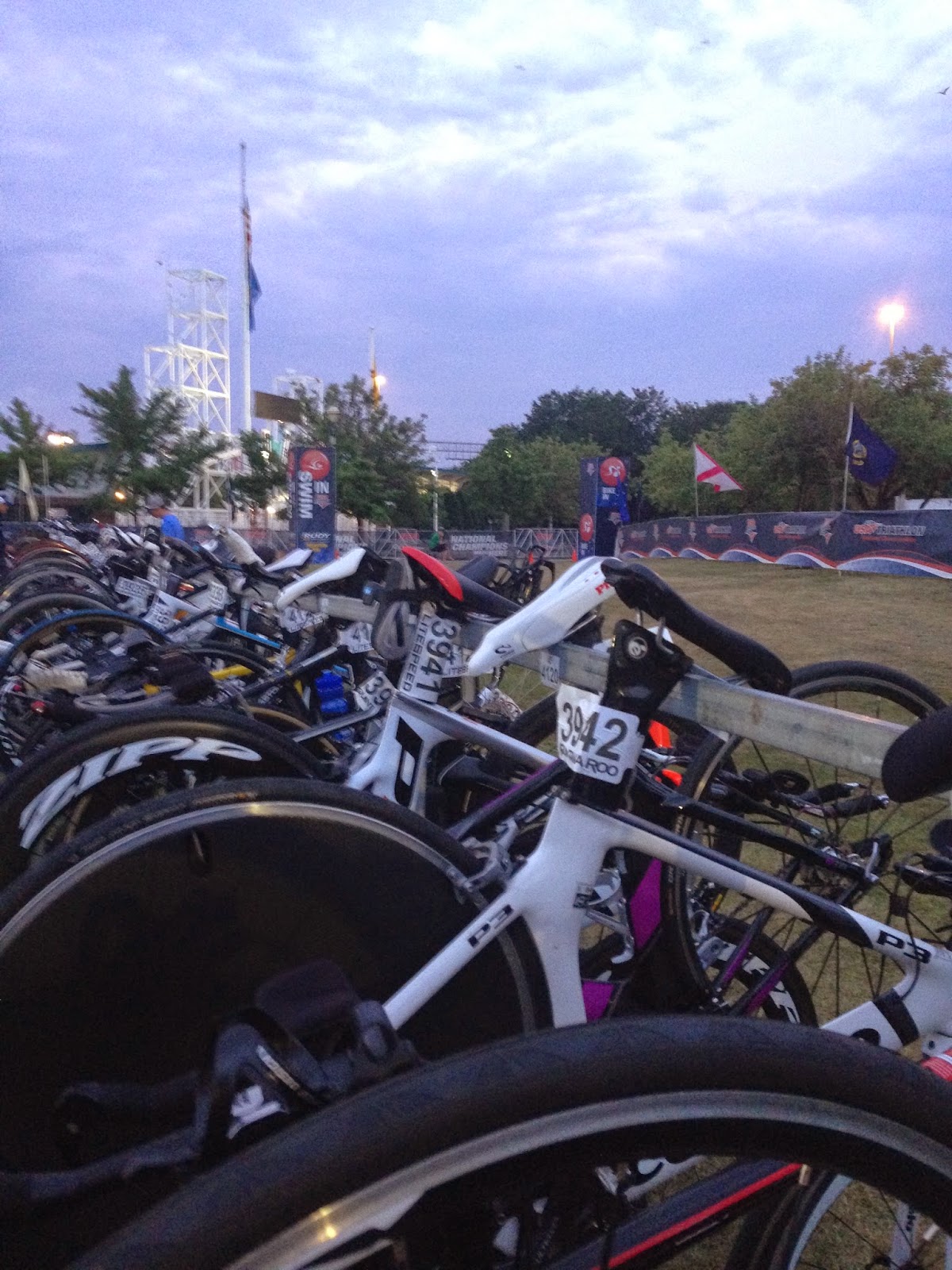 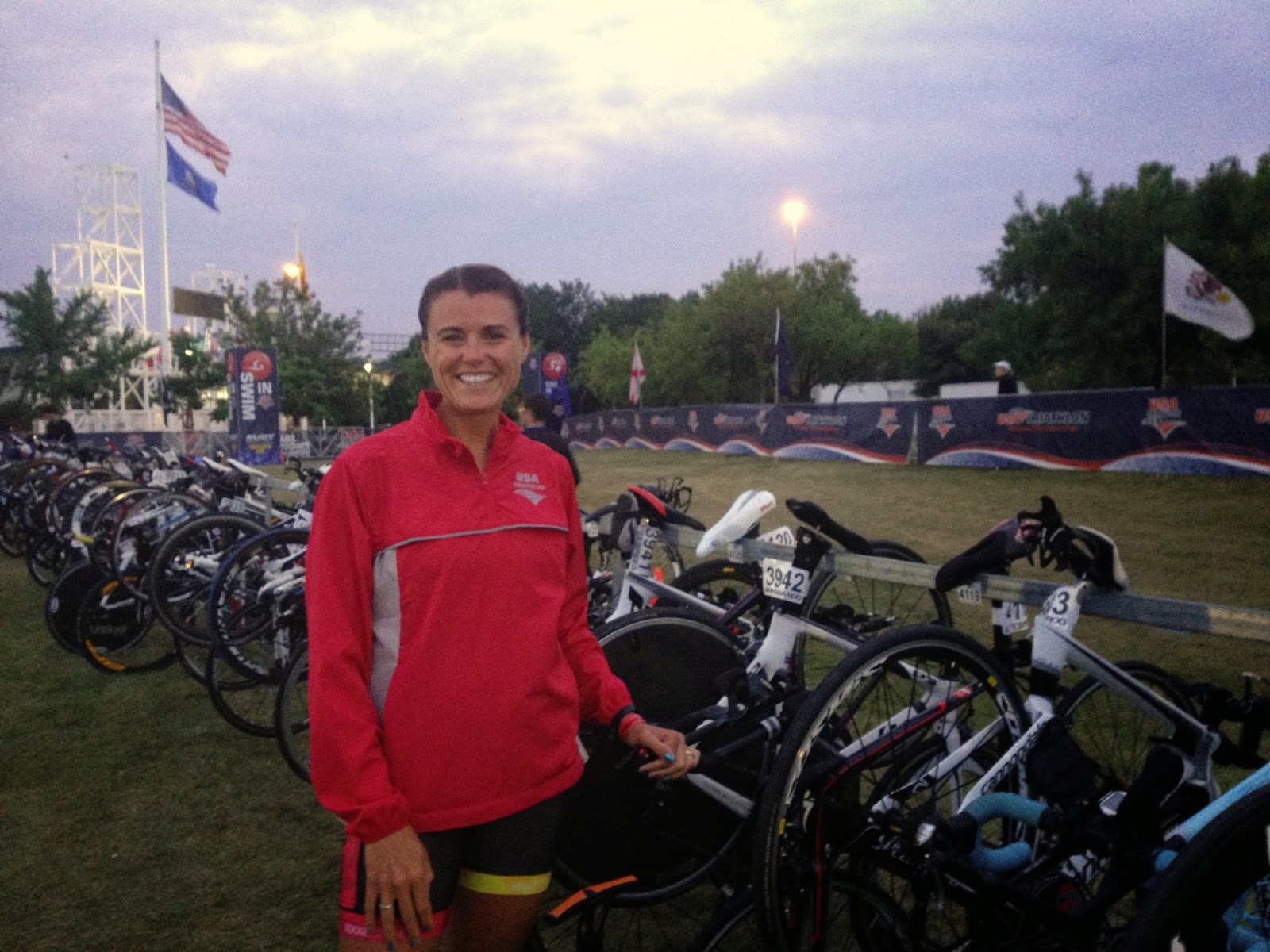 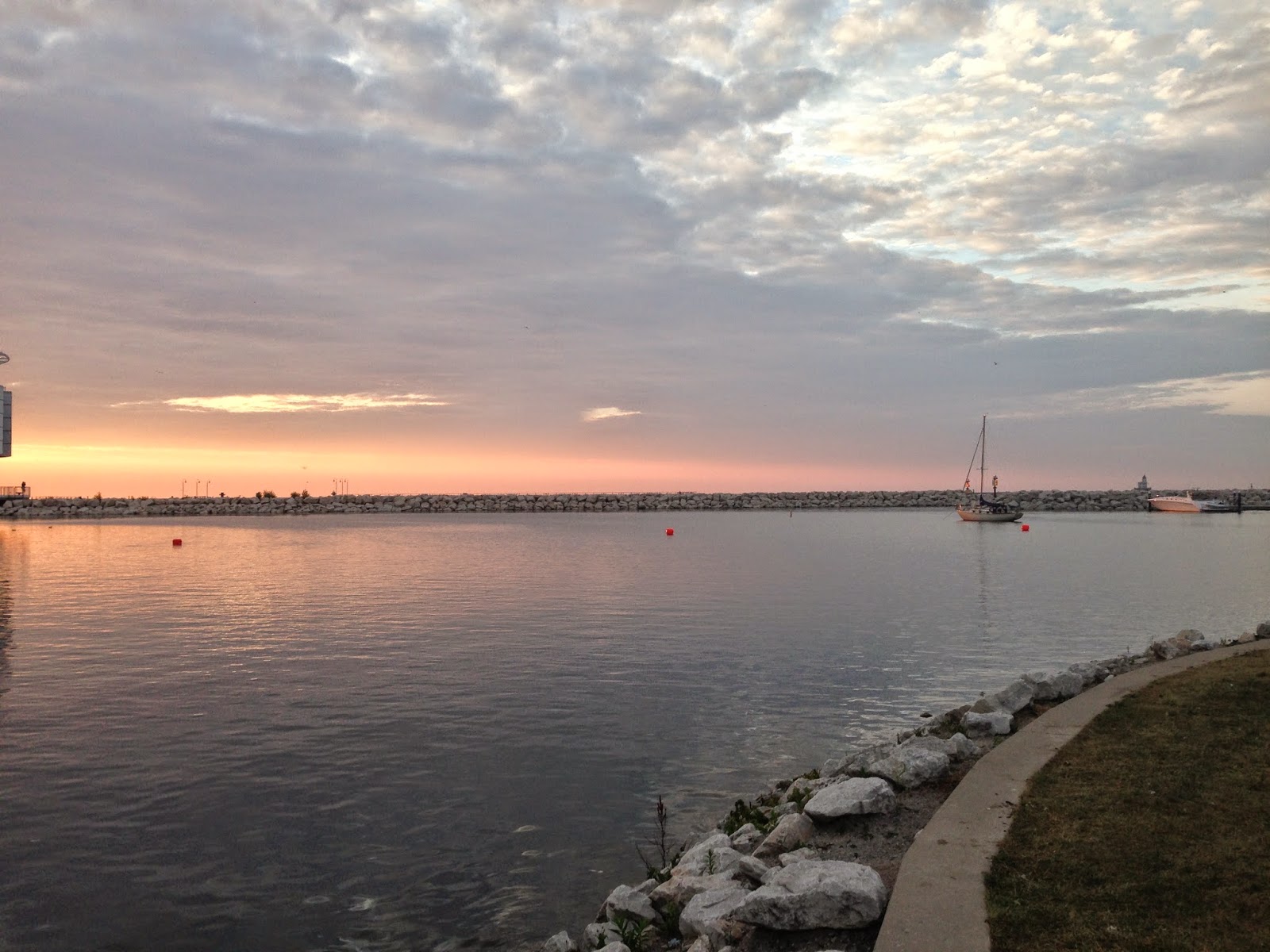 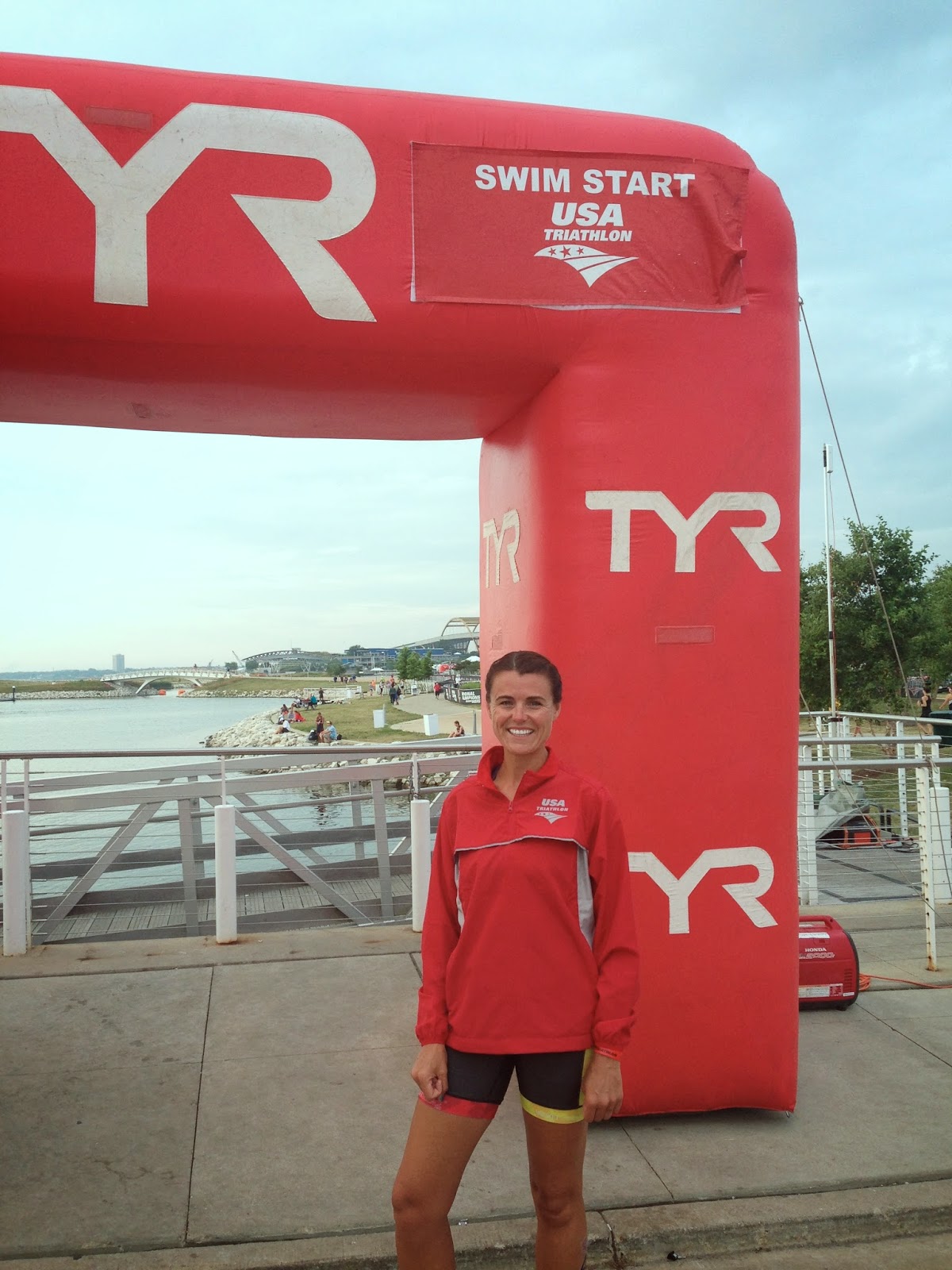 Bike: 20k/38:51.5 The course was very nice.  I was happy to average 19.16 mph with the hills that were involved.  They closed I-794 so that we could climb the Hoan Bridge.  That was a pretty serious climb.  I passed 5 people on the three major uphills, and was feeling pretty good about my training.  I had forgotten my watch, so I  had no way of knowing how fast I was really going.  I did see a woman fall on her bike on the downhill.  Her face was badly bloodied, which gave me a pretty big scare.  I don't think it affected my time any, but I had a good cry on the bike after I saw her.  I had hoped for 36 min on the bike, so I only missed that by a few minutes.

Run: 5k/26:29.6 I don't really know why, but I thought I would be significantly faster on this run.  I averaged 8:31 min/mi, which is pretty good for me.  I really wanted to be closer to 21 or 22 minutes for the 5k.  It was a very flat course with a nice breeze off the water.  I really did give it my all and know that I couldn't have run any faster on that day.  It was during the run that I knew I was not going to make the team. 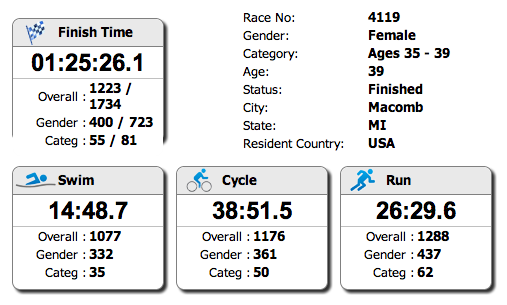 I felt pretty good about the race for a bit after I crossed the finish line.  I still had that "I feel like a million dollars" feeling when I crossed, but I did feel a bit let down as the morning went on.  Honestly, I felt foolish for thinking that I could potentially finish top 25.

One of my favorite things about racing triathlons, is that (until this race) I was never focused on racing others.  I went into every race wanting to do the best I could do on that day.  Hoping to PR or at least improve one leg of the race or another.  I have been placing this year, and I do love the BLING, but it truly was not about competing with others... for me.  I let myself get caught up in that this race.  Everything about this race felt different because of it.

What I learned: Know what I love about my sport and embrace it.  I do not need to measure my ability against anyone else.  I have improved a lot since I started two seasons ago and I will continue to improve as long as I continue to love doing it.  I will be back at nationals next year.  I will qualify for the olympic distance and I will race it - regardless of how my times measure up to the field.  I will race it next year without worrying about anyone else and embrace what I love.  AND I do love me some bling: 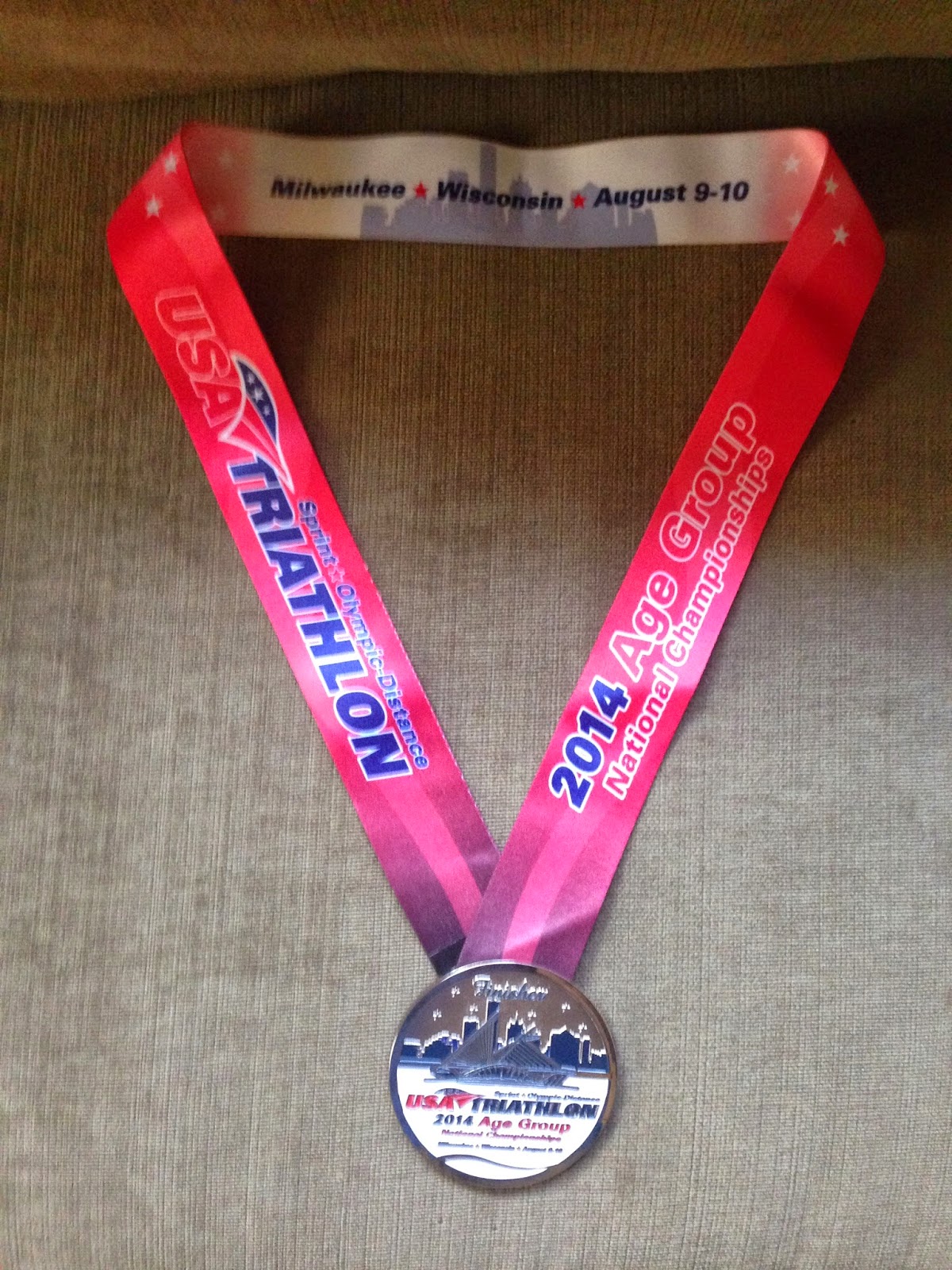 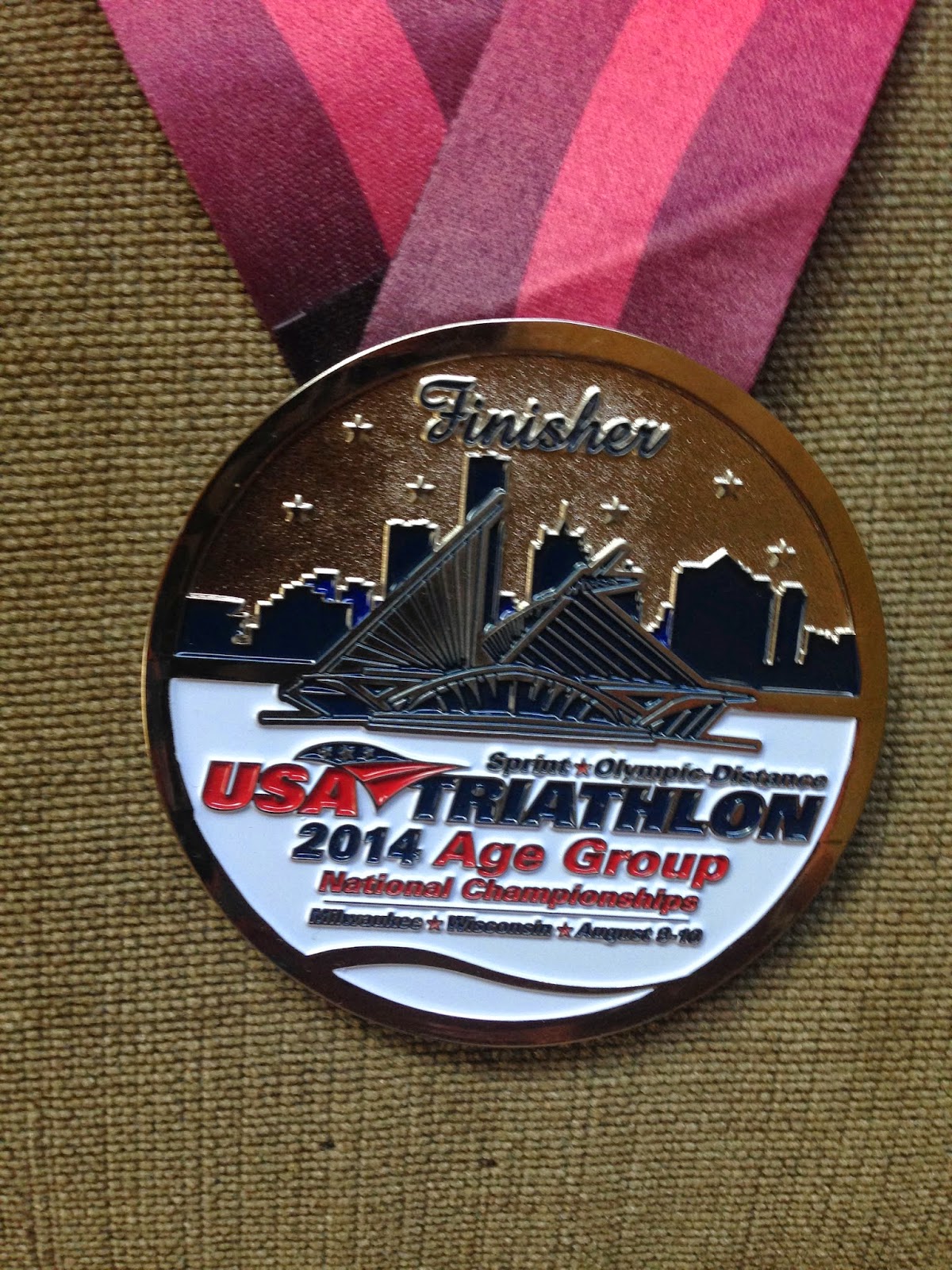 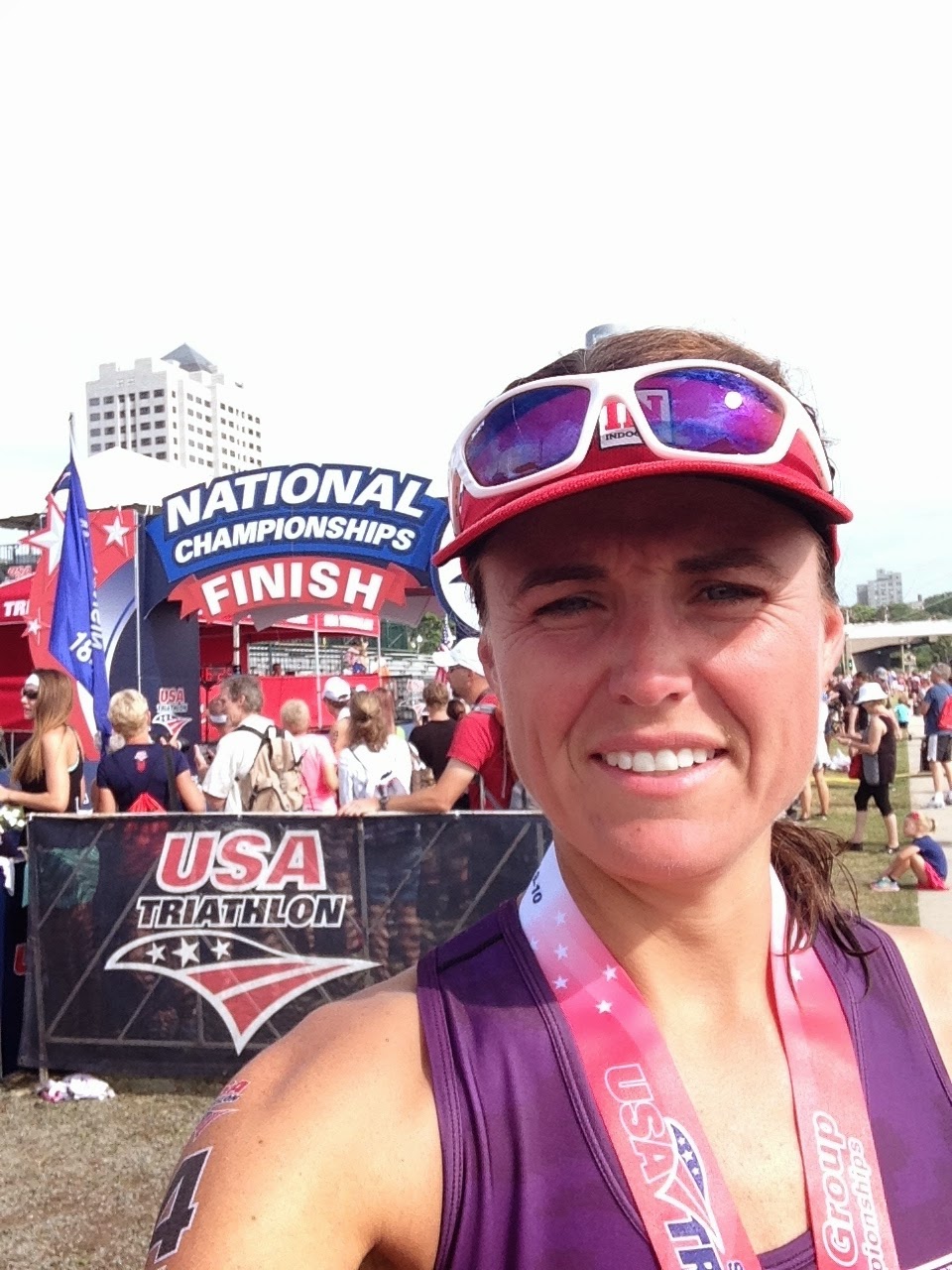