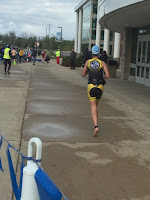 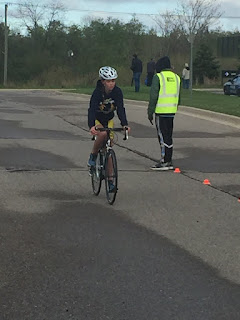 Bike 4.3 mi - 21:19 -  3/5 Age Group -- This was a challenging course with a couple of big hills.  They also had the kids stop after the first loop to get a sticker on their helmet.  She said it was difficult to get started again after that.  She was still 4 minutes faster than last year!
Run - 1 mi - 9:53 -  4/5 Age Group  - I am so proud of her for this time.  She has been working on her run, and it showed today.  It was snowing big fluffy snowflakes and she still pushed through!

Sprint Distance Adults Race
I did not set specific time goals for this race, because it was a "C" priority race, and they shortened the bike to a 10-mile route.  I knew I wanted to work out the bugs for next week's IM70.3 in Chattanooga.  While I was unloading the bikes... bug number 1 - no water bottle for the bike.  Rookie mistake, but at least it was only a 10 mile route AND it was freezing!!

Bike 10 mi - 36:19 -  2/9 Age Group -- This bike course is very hilly at the beginning and the end.  I had to get off my bike completely to get around a truck that was stopped at a turn, cop was not letting him by and he was too close the edge to ride next to him.  UGH!!  bug number 3: power meter was not being picked up by either of my garmins. I don't really need it on a 10 mile ride, but I will want to get that worked out before next weekend!

Run - 3.1 mi - 28:24 -  3/5 Age Group  - Solid run.  Very hilly!!  I only walked to take off my cycling jacket.  Weather was tough - I was freezing but sweating.  I did one loop with jacket on and one with jacket off.  I was faster without it, but exposed skin was VERY red!!  bug number 4: the top hickie on my shoes came loose right outside of transition.  I will want to work on that before next week, too!

Proud to represent TriToFinish in the awesome EpixGear race kit on the course and the podium! 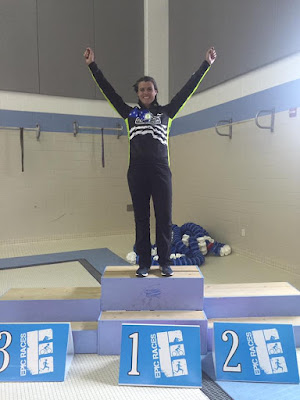