July 20, 2016
I am traveling this week, with my #wcw for this week.  There are few people in this world that motivate me consistently they way that my best friend does.  So, for my #wcw #whywetri style this week, I would like to introduce you to my best friend, Denise: 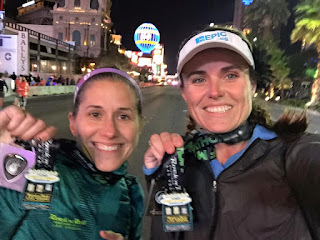 It is hard for me to put into words what it is about Denise that is so motivating, but I will try. Neither of us were runners when we met.  Neither of us were runners for the first 15 years of our friendship.  Even before we were runners/athletes, she motivated me to be the best me I could be.  Denise has worked hard for everything she has and has had significant hurdles along the way.  She lost both of her parents, in a very close family, way too young.  It would have been so easy to give in to the sad and just go through the motions of life.  Denise knew her parents want more for her.  She made a promise to her Dad that she would keep fighting cancer even after he couldn't anymore.  So she has... she has continued that fight against cancer in the form of fundraising!  First it was the Breast Cancer 3-Day.  Once we started running together, she switched it up to join Team In Training and running Marathons, of which she has now run 3.  One of the biggest ways that Denise motivates me is how she continues to put one foot in front of the other, even when it is hard, because she promised her dad that she would.

The other way that Denise motivates me is how she genuinely supports me, and others, with all of her energy.  When she was my "Sherpa" at IMLP last year, she shed as many tears as I did throughout the day.  She was in it 100%, supporting my crazy.  This year, one of her TNT teammates was in the running for Man of the Year in North Carolina.  She was completely invested in his fundraising efforts, making sure to participate and promote anything that she could to help him win.  When he did win, she was as proud of him as she would be if she had won it herself.  Her empathy in both good times and bad is second to none.

I did not ask Denise the questions that I have been using for the rest of my #wcw interviews, I think I can answer all of them for her - she will have to correct me if I am wrong ;-)

1.  First try?  She hasn't done a tri, and probably won't.  I think she will do a duathlon in the next year or so.

2.  What motivates you to do triathlons?  I will have to substitute running here - but, the first is her promise to her dad.  The second thing, I think, is spending time with her running friends (especially her TNT team in NC).  She also likes to stay active in general, even before we were runners, she was always active in some way.  I think staying active in general, motivates her to run.

3.  What races are on her bucket list?  BOSTON - and we she gets there I will be there cheering her on with tears in my eyes the way she was there for me in Lake Placid.

4.  Most proud of?  I think she is most proud of her circle of friends.  Denise is very protective of her people.  Those of you reading this that are her people know what I mean.  Sure, she is proud of her career, her progress in running, her travel resume - but I don't think there is anything that give her bigger pride than spending time with and talking about her people.

5.  If she could run with one person, who would it be?  I think she would say Harriette Thompson, the 92 year old runner that runs marathons with Team in Training.  She ran the same race as her in San Diego this year (I think Harriette did the half?)  I think Denise would like to run a race with her and talk to her :-)