March 28, 2022
"Why did you choose this race?"  Before we could talk about race and nutrition plans, Coach Sami asked me that question.  I 100% chose it for the destination and the vacation Mark and I would have after the race in San Juan.  What a great perspective to tuck away for race day! 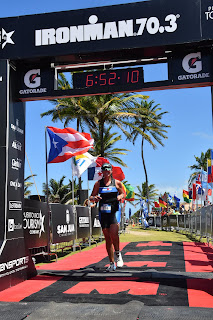 Mark and I got to San Juan on Thursday afternoon and checked into our VRBO on Condado beach.  I chose this location because of the view... and its proximity to swim start.  It was a bit of a hike to get to the athlete's village and transition, but still doable which made everything easier than trying to deal with the traffic in San Juan! 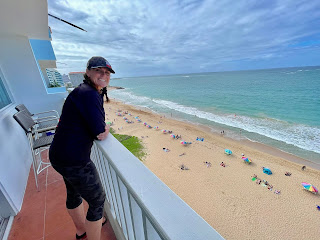 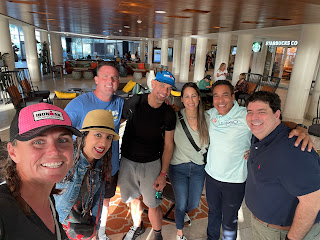 Friday and Saturday, I got checked-in.  Rode my bike a couple of times on the super SAFE green paths found near transition.  I swam with several other athletes and ran in the middle of the day to TRY to acclimate a little to the heat and humidity.  I met tons of Team Zoot and Ironman Foundation Teammates.  I stuck to my nutrition plan with pasta on Friday and Waffles on Saturday.  With my alarm set for 3 am and my mental preparation done, I went to sleep at about 7:00pm. 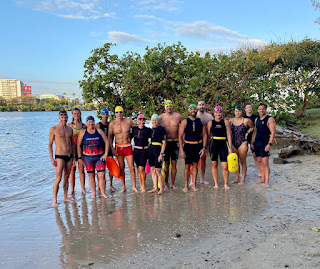 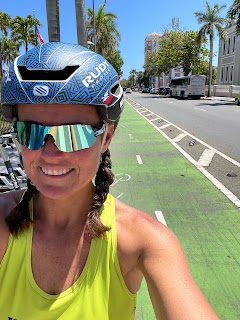 I got up at 3, had my coffee, rebraided my hair, made my breakfast, and hit the road by 3:45.  I walked to transition to set up my transition bags and bike nutrition then walked back to the condo to grab Mark, Cindy, and Freddy and leave my backpack and walking shoes behind.  We all walked to swim start and waited for the race to start. 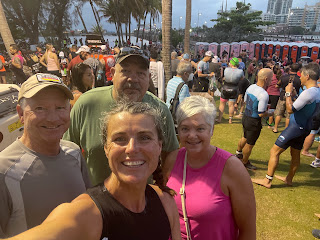 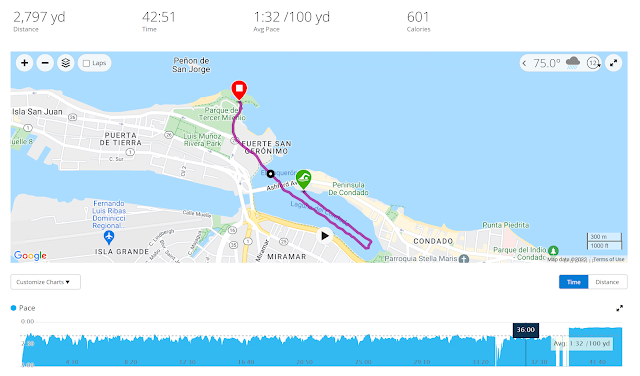 You'll have to ignore the last 4.5 minutes of this profile, as I did not hit the lap button until I was in transition - I was convinced that is what the race timers did - nope. 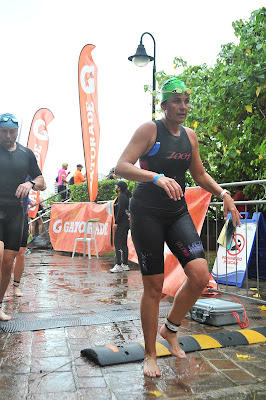 We got rained on while waiting to go in the water and I think it rained a bit while I was swimming, but it did not put a damper on my swim at all.  I lined up in the back of the 31-35 minute group (which was the 2nd swim group.)  I think that many athletes took the "just get in the first group" approach, as I passed a ton of people that had clearly mis-seeded themselves.  They were sending 3 of us off every 5 seconds, so it should not have been as crowded as it was.  I wish there was a better way to do the seeding.


Swim Strategy:  Put my head down and go.  I love to swim and really don't like to worry or think about it too much.  Just want to get into the race and be as efficient as possible.  I expected about 38 minutes in the water and I was pretty dead-on :-)  The ramp out of the water was a little steep and the run to transition was LONG - but I left shoes at swim exit and actually saw Mark as I was running to transition, so that was nice! 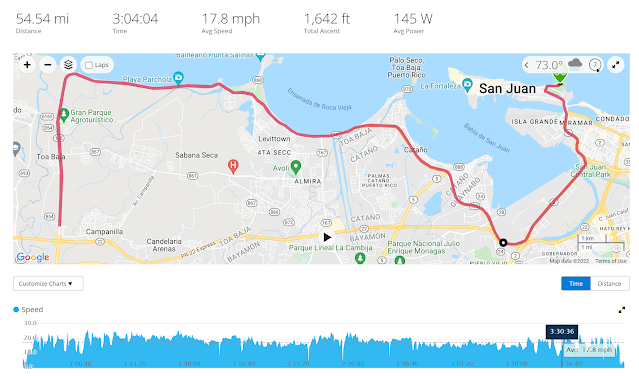 This bike course is BEAUTIFUL!!  It rained for a bit when I first left transition.  It was a hard cold rain, so it did slow me down a little, but it did not last long and it brought the most well-placed rainbow later on my ride.  The wind was there but not super strong on my way out (bummer, because it would have been to my back.)  The expressway overpasses were tough, with both inclines and really rough roads.  There were a ton of water bottles and bike parts scattered.  We were really spread out for my first 10 miles, but then it got a bit crowded where the double out and back section was.  The wind finally picked up a bit and gave me a push past the ocean, but then I turned south and got smacked headfirst with the wind...  This was mile 18, sponsored by Diana Stark.  She said "Life doesn't get easier or more forgiving.  You get stronger and more resilient"  Pretty perfect for my first brush with the wind! 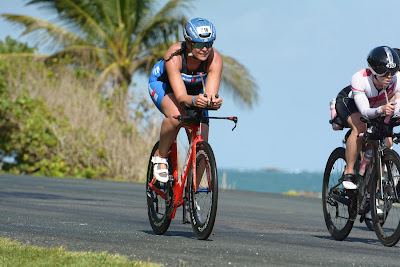 At the turn around I enjoyed the wind pushing me until I turned west.  I guess the wind was probably blowing northeast, but somehow it felt head-on while riding both south and west.  My legs started cramping at this point and I realized I no longer had my base salt.  I took as much Gatorade as my bike would hold and stuck to my solid nutrition plan, but my legs just kept cramping.  At mile 33, I stopped and shook my legs out for a second.  There was no sponsor for Mile 33, but the next one was Mile 36 from Denise Hartmann - "Keep On Keeping On!"  OK, lets do it!!

Once I hit the "to finish" choice at mile 45, I was feeling a little beat up by the wind, but I knew I was doing well on time and was happy to be heading away from the ocean and the unobstructed wind.  My flat kit was open and I was losing CO2 and tires all over the road, so I had to stop for a second to get a tube untangled from my pedal at mile 48... I really just wanted to be done at that point!!  2 complete stops on one 70.3 course is not ideal...  Cramping legs, also not ideal.  Amazing views, cloud cover to hold off the heat, an AMAZING rainbow, and long stretches with the tailwind... I almost forgot about the other things!!

Bike Strategy: Low Zone 2 for the first half, High Zone 2 - Low Zone 3 for the 2nd half if I felt up to it.   I set my watch to "yell at me" if my power got too high, but I did not obsess with my power.  I don't have a separate bike computer, and it is hard to see my watch while I ride.  When I look at my ride on training peaks though, it looks like I did ok keeping my average power down.   I was hoping for a 3 hour bike time, with 25 mph wind, I am MORE than happy with my bike time! 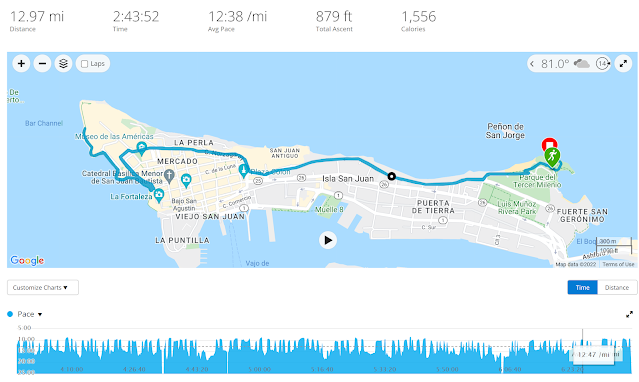 This run course is ALL hills.  Some are as steep as 10% grade.  It is HARD!  We were lucky to have cloud cover for the first half of my run time, so that helped hold off the heat a bit.  The course starts with a bridge, which I walked...  then a short run through a very busy park, with so many excited spectators.  Then, there is a short but steep hill from the park toward the ocean and the view that would be the focus of my next 2.5+ hours.  My quads did not like this uphill and the same cramps I had on the bike came back, even though I was walking.  I had a new tube of base salt and Gatorade in my handheld water bottle. I knew I would have to work hard to get rid of the cramps.  I took double the base salts I normally do in that first lap and I filled my water bottle with half Gatorade/half water and ate a half banana at every aid station.  It worked!!  The last time I felt the cramps were at mile 4 - PHEW!! 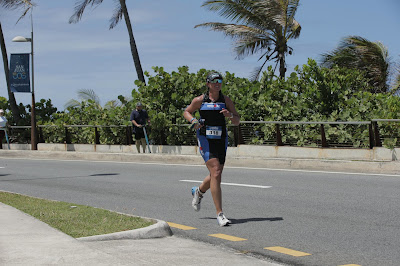 The infamous microwave wasn't so bad on my first pass, thanks to the clouds.  Don't worry, I still got cooked in the microwave on the second pass - it was HOT!!

Run Strategy: Walk the uphills.  Run to heartrate 160, then walk it back to 140.  Treat the course like 4 5ks, and run the last 5k.  For the first 5k, I just worked to get rid of the cramps.  For the 2nd 5k, I tried to run to 160, but I felt totally spent when my heart rate got to 140, so I would have to walk.  I made myself run again (unless it was an uphill) when my heart rate got down to 120.  That worked out OK, so I stuck to that for the 3rd 5k, too.  When I saw the 10 mile sign, I really wanted to run the last 5k...  it didn't happen.  That last 5k I did run as much as I could.  I took in the ocean views and thanked all the volunteers.  I knew my Super Happy Goal of 7 hours would happen, I felt SUPER HAPPY about that.  I looked over the quotes from my sponsors when I was walking and appreciated having their encouragement with me! 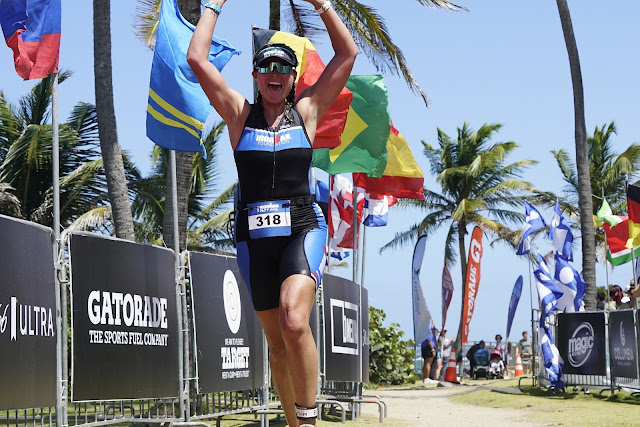 This race is good incredible!  The spectators and volunteers were incredible.  It is a challenge with the wind, heat, humid, and hills - but all Ironman courses have “something” to make them uniquely difficult.  The view on this course…. There are just no words and that is why I 100% recommend doing this race!!  Make sure you stay for a few days after to really explore, too!!

See all of my FinisherPix pictures from this race here!