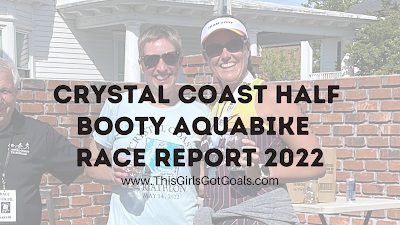 Beaufort, NC is only 1.5 hours from me, but since packets had to be picked up on Friday I got a hotel and stayed for the night before.  I was not able to swim the course on Friday because the channel is not open for swimming other than during the race.  I picked up my packet, then drove the bike course to get a feel for what I should expect.  Tyler (my 21-year-old son) was in town this week and he wanted Peak Pizza for lunch before he got on the plane back to AZ, so I did not do my normal pre-race pancakes.  I did try to maintain the rest of my pre-race routines though setting out flat Erin and getting my battle braids in the night before.

I woke up Saturday morning to lots of rain, further changing my normal pre-race rituals.  I usually try to be one of the first to transition to reduce stress on race morning.  On this day, I was more interested in staying as warm and dry as possible, as long as possible.  I did my goal post from the hotel, which was tough to do since this was my first Aquabike (only swim and run) event, ever. 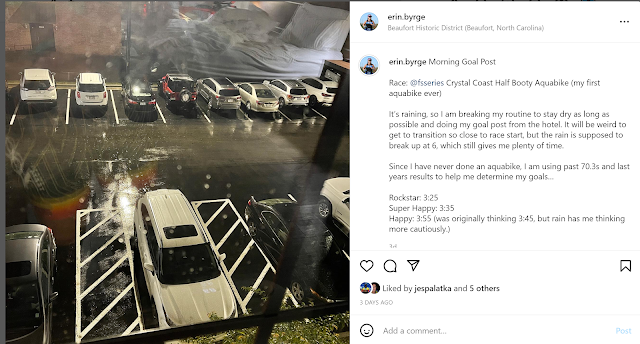 The rain broke up about an hour before the race start, giving me plenty of time to set up transition, meet a few Team Zoot friends, and get mentally prepared to race.  That said, I will still be one of the first to transition in the future, I like to ease into the morning! 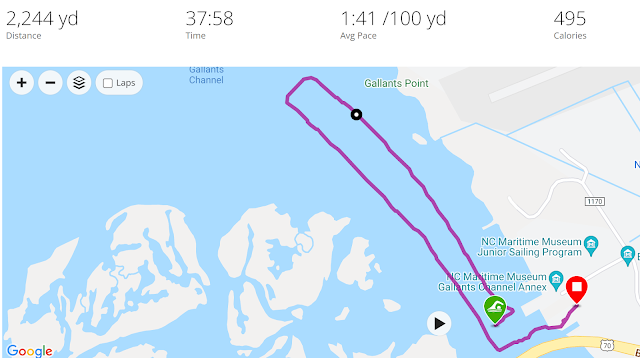 What a beautiful swim course!  We started in deep water, treading water until a cannon sounded (pirate theme all the way.)  I felt good about my sighting, but wish they had used a different color for the sight buoys on the way back.  I did not get off course, but I could see that many were aiming for the swim-out buoys on their way back, adding a lot of swimming for them.  We swam into the current on the way out, which I could feel, but it wasn't terrible.  We did get a little help from that current on the way in.  I struggled a bit with the ladder getting out, but I did not lose much time there.  I lost the most time sitting for the wetsuit remover volunteer - I would have been better off taking off my own wetsuit...  oh well :-)

For this event, the run from the channel was included in the swim time, and the long run to and from the transition from the road for the bike portion was included in the bike time.  So transition time is literally only the time in the small transition area.  I should have been a bit faster since my wetsuit was already off and I don't wear socks, but I fumbled a bit thinking about sunglasses and getting the bags off of my shoes. 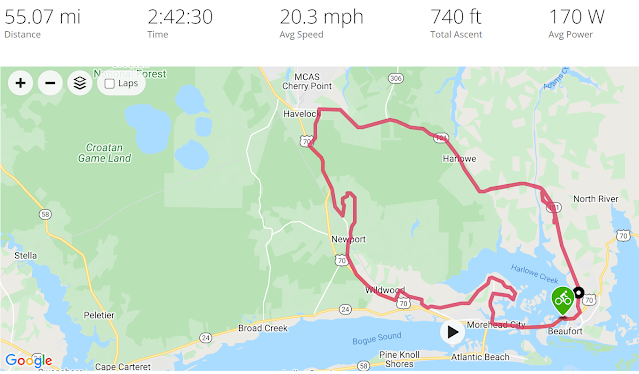 Never doubt the power of confidence during athletic endeavors!  I came into this race with several super strong bike legs in a row.  Not counting the race with 2 flats,  I have been getting stronger and faster on the bike leg with each race this season, and knowing I did not have to run after the bike today meant I could go all out from the start to the finish!  This course starts with two high-rise bridges within the first 4 miles (and then one short climb at mile 44) but other than that it is a very flat boring course.  I counted 6 storage facilities (iykyk) when I drove the course, so I used those to mark progress.  I also noted Sanders Ln. was at the halfway point.  I thought I could channel my inner "no limits" when I saw that street, and I definitely did!  I passed two fit-looking male riders between the two points where Sanders Ln. intersected the road we were riding on.
Coach Sami told me that if I noticed things on the ride, then I wasn't riding hard enough (LOL), so when I pointed out the 8ft tall tin man to the guy I had just passed I laughed and got back to work - apparently I wasn't riding hard enough at that exact point... I doubt that guy agrees.

There is an out & back lollipop section at about mile 45 which allowed me to take stock of where I was but had no idea who was racing aquabike and who was racing the full triathlon.  I did notice I was the 2nd female rider, so worse case I was in 2nd place (she ended up taking 2nd in the overall triathlon).  I was able to maintain that spot the last 10 miles into transition (and my "finish line")
I stuck to my nutrition plan, except maybe not as much water as I will need in Virginia as the sun stayed away for the whole bike and it did not get that hot.
As I ran into transition I yelled out "Yay, Aquabike" and the relay teams that were waiting for their teammates all sort of cheered.  No finish line... weird!  After a 1 mile Run OTB because I am still training for the rest of this season, I walked the 1.2 miles to the finish line with my medal and took a finish line picture :-) 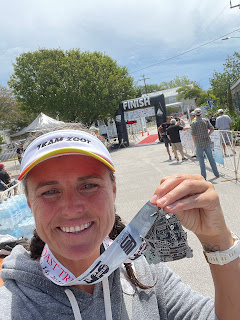 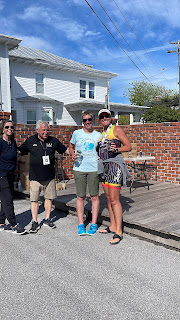 Next up: 9th weekend of my 9 weeks straight of racing!  I'll finish out the streak with 2 races next weekend.  New River Splash Sprint in Jacksonville on Saturday and Carolina Beach Double Sprint on Sunday.