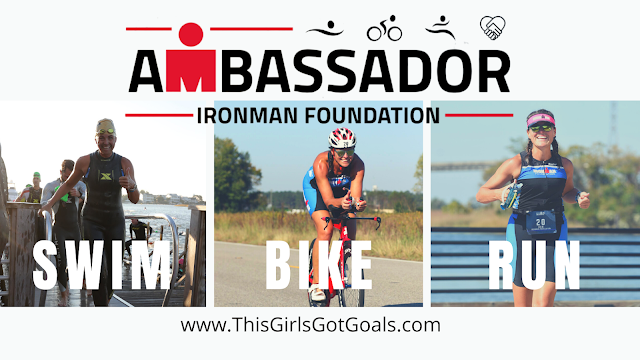 Going into the 2022 race season having been selected as an Ambassador for the Ironman Foundation has me reflecting on WHY...  Why triathlon has become such an important part of who I am.  Why I will go the extra mile to fundraise while I train and race.  Why I will help build a culture in Team IMF of family and collaboration.   Why I will continue to believe that Anything Is Possible!
Growing up, I enjoyed swimming and biking, nothing competitive, they were just my preferred outdoor activities.  Even though I participated in track in high school, running was never my thing. Fast forward to 2010, I had two active kids (8 and 10), a teaching career, an amazing husband, and a nice house.  I was fluffy but did not think myself fat.  On paper (well on Facebook), it looked like I “had it all.”  I was going through the motions of being a teacher, taxi mom, wife, and friend.  Something was missing, I just didn’t know what it was… yet.
At age 10, my son was learning to love to run and wanted to participate in a 5k. I did not think that I should put my 10-year old into a 5k by himself, so we signed up together.  Even though I was not in the greatest shape, I put the Couch to 5k app on my phone and started training.  My first 5k was April 10, 2011, I don’t remember my time, but my son beat me by at least 6 minutes.  It was slow, but I "could" run. That year I did a few more 5k’s “with” my son (he beat me every time.)  I was slowly becoming a runner.  I was also taking a spinning class that was taught by an instructor that had done a local tri.  She knew that I was doing 5k’s and told me I should do triathlons.  The seed was planted.
In 2012, as I set yet another New Year’s Resolution to lose weight, I added that I would complete a local triathlon that year.  So, I did…  I completed 7 that year: 1 indoor, 5 sprints, and an Olympic distance.  I had found what I was missing.  I had found the thing that showed me how to be proud of myself, how to prioritize myself, and how to inspire myself to want more.  I found people that lift each other up and compete with themselves before others, and that inspires me!!!  I found a community of diverse people with this one thing in common, that somehow made them feel like family.  I found that finish line feeling of accomplishment and I wanted to share that feeling with everyone!
My “why” has continued to grow each year I have competed in Triathlons.  In 2012, my why was about finding balance between being a wife, mother, teacher, and self.  In 2013, my why was about overcoming a motorcycle accident and getting back out there, no matter how hard it was.  In 2014, I learned that I could inspire others when my daughter and my students began to join me. Inspiring others became a  major part of my why as others in the sport continued to inspire me.  In 2015, I tackled my first full ironman.  My why was about finding the strength to push through injuries and life’s challenges to train and complete 140.6 miles.  I borrowed that strength from my family and friends.  I would have never completed that race without them.  I learned so much about myself in those 15+ hours!  My ultra-competitive, type "A" personality had to take a back seat while I learned to really enjoy the process of tackling the impossible.  Every time I think about that race, I remember that SOMETIMES GOOD ENOUGH IS PRETTY AMAZING!  Check out my IMLP race report at https://www.thisgirlsgotgoals.com/2015/07/ironman-lake-placid-race-report.html
In 2016, my why was to show that having goals and reaching towards them is what keeps us balanced, inspires others and gives us something to fight with, even when the fight seems impossible.  That year, my why was to help others learn that they are "enough", and they too can tackle what seems "impossible."  I raised $27,000 to help other women find their balance, overcome obstacles, inspire themselves and others, and find strength through this amazing sport.  That $27,000 was administered by Women for Tri as grants and scholarships for women getting into our sport.  After raising $27,000, I represented Women for Tri at the 2016 Ironman World Championships in Kona.  You can read my Kona race report at https://www.thisgirlsgotgoals.com/2016/11/race-report-im-world-championships-kona.html
After a couple of tough 70.3 races in 2018 and 2019, then a world pandemic, I let myself get a little too far removed from triathlon.  2021 was a “comeback” year!!  I was finding my new triathlon community after we moved to North Carolina and reconnecting with my previous tri-friends as we cheer each other on virtually!!  I was able to finish off the 2021 season with a PR at my new 'home' course, IM70.3 North Carolina where I competed as a member of Team IMF (Ironman Foundation) having raised $1750 that was used as part of a grant that was used by the local YMCA for a camp for children of military members!  I was once again reminded that I can use triathlon to make an IMPACT.  In 2021 I reconnected with my why from 2016 and found my confidence and strength once again!
In 2022, I will train for 3 Ironman 70.3 races representing the Ironman Foundation as one of their 33 Ambassadors.  Every mile (training and racing) will be used to help make an IMPACT in the world.  Ironman Foundation will use the money that I raise this year to continue its important mission to Give Locally and Act Globally.  For more information on their mission (and how you can make an IMPACT) head to www.ironmanfoundation.org.  To donate please visit https://ironmanfoundation.donordrive.com/participant/Erin-Byrge

I do triathlons and raise money for Ironman Foundation to inspire myself and others to be the best we can be, to build a culture of lifting others up, and to make an IMPACT in the communities that we race in!  Your donations inspire me to keep going when the miles get long and hard.  Thank you!

" Why did you choose this race?"  Before we could talk about race and nutrition plans, Coach Sami asked me that question.  I 100% chose it for the destination and the vacation Mark and I would have after the race in San Juan.  What a great perspective to tuck away for race day! Mark and I got to San Juan on Thursday afternoon and checked into our VRBO on Condado beach.  I chose this location because of the view... and its proximity to swim start.  It was a bit of a hike to get to the athlete's village and transition, but still doable which made everything easier than trying to deal with the traffic in San Juan!   Friday and Saturday, I got checked-in.  Rode my bike a couple of times on the super SAFE green paths found near transition.  I swam with several other athletes and ran in the middle of the day to TRY to acclimate a little to the heat and humidity.  I met tons of Team Zoot and Ironman Foundation Teammates.  I stuck to my nutrition plan with pasta on Friday and Wa
Post a Comment
Read more

It is almost time for the BIG ONE!  The race that I have been fundraising for and working towards since November of last year: the IRONMAN 70.3 World Championships in St. George, Utah!  As an Ironman Foundation Ambassador, all of my Ironman brand races have me RACING FOR MORE, but this one is the pinnacle.  I am proud to be representing IMF and all of the good that can come from their initiatives.  With that in mind, I am asking you to sponsor a mile during this race.   For each of my IRONMAN races this year, I have taken your inspiration and printed it on tattoo paper to put on my arms and legs so that I can see it while I am riding and running.  When the going gets tough, these notes remind me that I am doing the race for more than myself!   Will you consider sponsoring a mile to help MAKE AN IMPACT and leave a quote or advice to inspire me during 70.3 St. George on October 28, 2022? Here is how: 1.  Choose the mile(s) you'd like to sponsor below.   *link to this spreadsheet
Post a Comment
Read more

Week 22-27 Update: IM70.3 Virginia's Blue Ridge Sponsor-A-Mile : $25 Top In Topsail: Memorial Day Raffle : $1421 T-Shirt Sales: $12 Semper Sparkle Shop Shopping Fundraiser: $84 Online Donations : $307 Overall Total: $15,735 Fundraising Events (mark your calendars): Sponsor-A-Mile for IM70.3 Virginia's Blue Ridge ENDS JUNE 1ST! Top in Topsail: Memorial Day Raffle - ENDS MAY 29TH June Shopping Fundraiser - Best Friends Boutique with Lisa Niederberger.  Join the fb group to stay in the loop. 25% of each purchase is donated. T-Shirt Sales - Ongoing - https://www.bonfire.com/store/this-girls-got-goals/ How you can help: Participate in the events above and invite your friends to participate, too! Donate Funds: https://ironmanfoundation.donordrive.com/participant/Erin-Byrge I’m asking for $1 per mile for those who are able, that’s $70.3. However, there is no amount too big or small. All amounts are sacrificing something else in your life and for that, I am so grateful! Plea
Post a Comment
Read more