June 05, 2016
Tri Greenville Triathlon holds a special place in my heart.  Three years ago this was Melissa's first OWS triathlon.  She placed in her division, which gave her "the bug." These two pictures are from 2014 and 2015.


Bike 3.75 mi - 14:50 (15.2 mph) -  1/4 Age Group, 4/16 Gender -- Shortly after transition this bike course has a pretty significant hill and according to Melissa "not enough downhills" to get that time back.  Her bike pictures always make me laugh, she is usually talking to me.  This year, she was telling me that she knocked herself in the lip with her helmet in transition :-)


Sprint Distance Adults Race
I did not set specific time goals for this race, because it was a "C" priority race, but I did want to beat my time from last year which was 1:20:22.  That said, I knew I wanted to kill the run.  I have had some crappy run times lately, and I needed to build some confidence with this run. 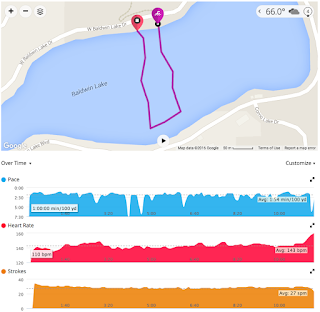 Swim - 400m (as advertised but was at least 500m) - 11:09 -  2/13 Age Group, 11/58 Gender  - This year I was able to swim in the Elite wave.  It was pretty intimidating standing on the beach with the fittest people there.  I have seen these people on the podiums at every race I have raced.  I was glad to not have to swim in the "women's wave" as that usually means catching up the the slower male swimmers and having to swim around them.  I assumed I would just be the back of the pack in this elite wave which would mean no passing and no "rerouting."  Surprisingly I held my own.  My swim was about a 1:30 slower than last year, but the course was long - at least 100m long (Garmin read 591yds, which is 540m, but that included my run to transition.)  I was in the back half of the pack, but far from last. 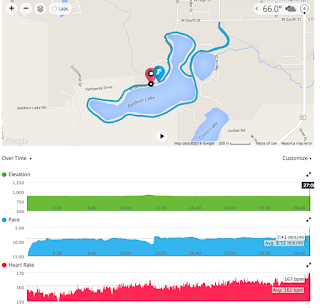 Bike 11.8 mi - 38:13 -  1/13 Age Group, 9/58 Gender -- I LOVE this bike course.  Elevation changes are enough to keep things interesting and challenging, but not enough to kill the legs for the run.  I am strongest on long gradual uphills, which there are two on this course, this usually gives me the chance to pass a lot of cyclists.  Since I started in the elite wave, I was riding with the strongest cyclists on the course.  Usually my strategy is to focus on one cyclist at a time and pass them, and then focus on the next.  Today, my focus was more on matching effort.  I did get to pass a couple 20 somethings with aero helmets and expensive race wheels on those uphills though - thank you God for my long legs :-)  My bike gave me the podium on this day.  I biked enough to have a great time, but not so much to kill my legs.  A teammate suggested that I may be going to hard on the bike, and that is why my runs have been so pitiful.  I kept that in mind on this bike course, knowing I wanted to kill the run. 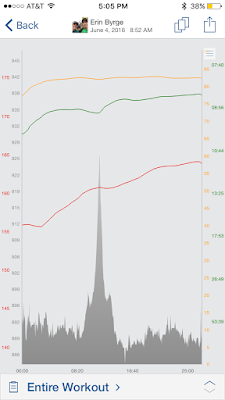 Run - 3.1 mi - 27:01 -  2/13 Age Group, 16/58 Gender  - I could not be more proud of this run.  I set out to give it my all and NOT WALK.  I have been giving myself permission to walk way too often.  (I am not saying you should never walk during a race, I am just saying that I have been walking more than I should lately.)  With this being a shorter, mostly flat race, with decent temperatures - I thought this would be a good race to "break the cycle".  To show what I am most proud of, I am sharing the TrainingPeaks graph instead of the Garmin.  Grey at the bottom is elevation.  Red line is heart rate.  Green is pace.  I assume yellow is cadence.  Notice the positive slope of the green line.  That took focus and lots of determination.  Once again, racing in the Elite group helped.  There was a 23 yo female that got off the bike at about the same time as me.  She beat me out of transition, but I was determined to catch her.  I stared at her back for about 2 of the 3.1 miles, than I finally took her.  For the last 1.1, I was sure she was right behind me...  so I pushed harder to make sure she didn't pass me back.  She won her age group.  I beat her by 56 seconds :-)

Of course we had to take our traditional picture with the medals :-)  What a great day!